The James Theatre in Dungog, also sometimes called the Dungog Picture Theatre, is the oldest purpose-built cinema still operating in Australia. Specialty Theatre was delighted to participate in this historic theatre refurbishment. 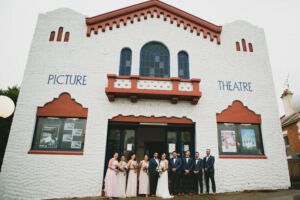 The Theatre was always more than just a cinema. From its inception it operated as a community and function centre, hosting balls, live events, meetings and private functions, as well as concerts and live performances. Now owned by the Council, it continues to operate as a community-run cinema, and the cultural and entertainment centre of Dungog.

It is host to Flickerfest in March, the Planet Dungog Music Festival in May, Agog Foreign Film Festival in August and the Dungog Festival in October, as well as a range of films, events and functions throughout the year.

Specialty Theatre was engaged to replace the aging cinema acoustic wall curtains in the cinema portion of the venue as well as to provide a new, velvet front-of-house curtain, a matching valance curtain, leg curtains on rotating leg units, and backdrop curtains to create a functional black-box theatre space for a wide variety of performance space uses.

Specialty Theatre specialises in this sort of theatre refurbishment. We take pride in our attention to detail and our use of fabrics and finishes that are consistent with architecture of the venue.