The moving theatre that has no stage 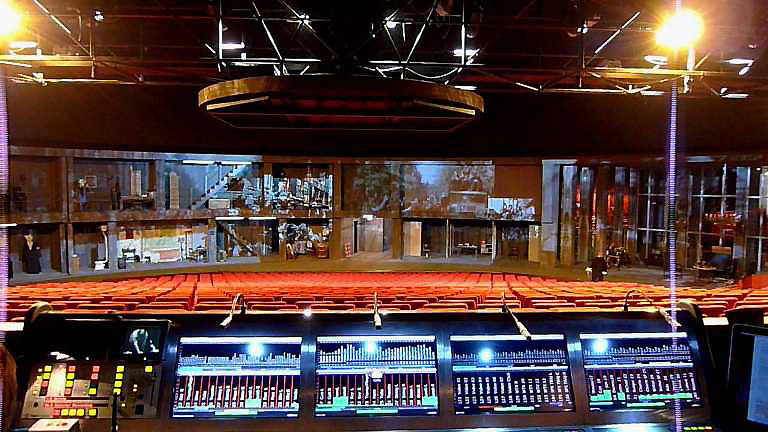 We love finding out about new, innovative theatre productions – especially if they make clever use of stage technology. Today’s plays and performances have come a long way from the good ol’ classics, using rigging, lighting and audio visual equipment to bring their vision to life. Now, a new theatre in the Netherlands is making headlines around the world by breaking common assumptions about what a theatre performance should be like.

TheaterHangaar, located in a former airport hanger in rural Holland, has done away with the stage and the traditional theatre seating layout. Instead, it uses a new staging system called SceneAround, where the audience sits on a revolving turntable that revolves around a series of sets. Requiring no set changes, no time is lost between scenes, resulting in a seamless performance. Sets are varied and even include a lifelike sea and real rain!

The auditorium is surrounded by projection panels that can open up in various widths (up to 180 degrees) and frame each set. The turning movement, speed and direction are automated, linked to sound and projection cues, and can be adjusted by computer. The auditorium is able to spin on its axis in both ways seven times. SceneAround is the world’s first rotating auditorium with the sets built around the audience, seating 1100 patrons, and was custom-built for the Dutch musical production Soldier of Orange.

If you want to experience this new form of theatre yourself, you may be in luck. Although currently only used in TheaterHangaar in the Netherlands, the SceneAround technology has received attention from directors around the world and will hopefully makes its way Down Under sometime in the next few years. We’re definitely looking forward to seeing it with our own eyes!